Elon Musk. People label him as eccentric and fearless. He’s got all these out-of-this-world ideas (literally and figuratively) that don’t just remain ideas but are materialized for the sake of the world and its people. It’s like no idea is big enough to scare him.

Musk doesn’t settle with imagining possibilities. He creates them. Have you ever thought of doing something that could change the world? Maybe you can start with a little dose of inspiration to make you believe that you can.

Here are 17 encouraging quotes from Elon Musk to fuel your own dream of changing the world. 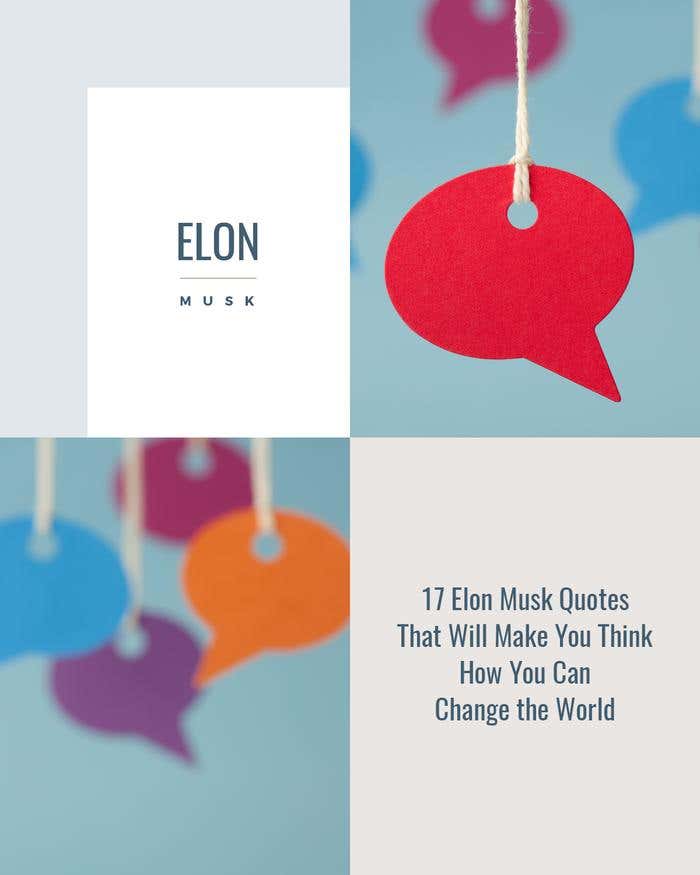 1. “When I was in college, I wanted to be involved in things that would change the world. Now I am.”

2. “The first step is to establish that something is possible. Then probability will occur.”

3. “I think it’s possible for ordinary people to choose to be extraordinary.”

NOT EVERY DAY IS A SUNNY DAY. DON’T GIVE UP.

4. “If you get up in the morning and think the future is going to be better, it is a bright day. Otherwise, it’s not.”

5. “Failure is an option here. If things are not failing, you are not innovating enough.”

6. “Never. I don’t ever give up. I’d have to be dead or completely incapacitated.”

7. “When something is important enough, you do it even if the odds are not in your favor.”

8. “Whatever you do, whatever area that you get into, even if you’re the best of the best, there’s always a chance of failure. So I think it’s important that you really like whatever you’re doing. If you don’t like it, life’s too short. If you like what you’re doing, you think about it even when you’re not working. It’s something that your mind is drawn to, and if you don’t like it, you just can’t make it work.”

WHAT MOTIVATES YOU TO WORK?

9. “Work like hell. I mean you just have to put in 80 to 100 hours every week. [This] improves the odds of success. If other people are putting in 40-hour workweeks and you’re putting in 100-hour workweeks, then even if you’re doing the same thing, you know that you will achieve in four months what it takes them a year to achieve.”

10. “People work better when they know what the goal is and why. It is important that people look forward to coming to work in the morning and enjoy working.”

11. “Really pay attention to negative feedback and solicit it, particularly from friends. Hardly anyone does that, and it’s incredibly helpful.”

12. “It’s very important to like the people you work with, otherwise life [and] your job is gonna be quite miserable.”

YOU CAN BUILD THE FUTURE.

13. “If you go back a few hundred years, what we take for granted today would seem like magic -- being able to talk to people over long distances, to transmit images, flying, accessing vast amounts of data like an oracle. These are all things that would have been considered magic a few hundred years ago.”

14. “Some people don’t like change, but you need to embrace change if the alternative is disaster.”

15. “I think we have a duty to maintain the light of consciousness to make sure it continues into the future.”

16. “I came to the conclusion that we should aspire to increase the scope and scale of human consciousness in order to better understand what questions to ask. Really, the only thing that makes sense is to strive for greater collective enlightenment.”

17. “I think it [colonizing Mars] would be the most inspiring thing that I can possibly imagine. Life needs to be more than just solving problems every day. You need to wake up and be excited about the future, and be inspired, and want to live.”

What do you think the future would be like if more people will emulate Elon Musk’s vision and achievements? If you have an exceptional idea of a product or innovation that you think the SpaceX founder would come up in the future, share it with us through this contest we’re running: Design the Future According to Elon Musk.

This article will examine some strategies and tools that freelancers can utilize to make themselves stand out from the crowd.

Blogs provide an amazing opportunity to start a side-business. Learn the basics before heading out on a new adventure