“Jay and I are both smitten with the industry,” says AviationShake co-founder Mike Beaton. “For us, it’s not just a job, it’s a life.”  A pilot by profession, Mike and his partner Jay Markowiak, an account executive for an aircraft ground handling company, created an East-London startup that seeks to remedy some of the recruitment pitfalls in the industry by providing essential skills training for aviation graduates and professionals. 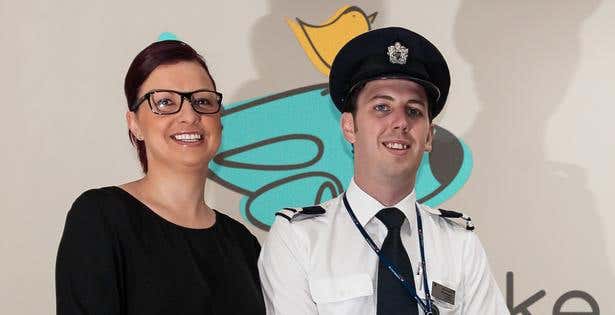 The problem Mike identified is not unique to the aviation industry. Training and education programs, while generally providing students with solid fundamental skills and knowledge, don’t always prepare graduates for the real world. In aviation, what this means is that fresh graduates aren’t aware of the entire range of roles and functions that work to keep the industry safe, efficient, and dynamic. They know about pilots and cabin crew, but not a whole lot else, which can make it difficult for them to take advantage of all the available opportunities, as well as for recruiters to find the right people for the job. “It’s a fact that graduates from aviation management courses—both at the baccalaureate and masters level—have surprisingly little real-world knowledge of the industry,” Mike reveals. “We’re hoping to educate graduates on the realities of the industry, as seen at airports across the world today. ”

With AviationShake, the pair intends to prepare applicants by running workshops on writing CVs and managing interviews to improve their marketability and increase their chances of advancement. “Great candidates get lost in the noise. We’re hoping to give these people a better chance by teaching them how to market themselves properly, how to network within aviation, and how to conduct a fruitful job hunt after graduation.”

Aviation companies also stand to benefit. The work involved in filtering through the sheer number of applicants can get quite expensive and they miss out on the more qualified candidates. “Through AviationShake, recruitment personnel will be dealing with trained and talented candidates and this makes their jobs easier.”

Indeed, AviationShake lives up to its name: “The name has all the right associations—we’re ‘shaking up’ aviation; we’re a path to getting that new job ‘handshake’; and we’re taking something relatively tried and tested and adding our own ingredients (kinda like a milkshake).”

To kick-start the venture, the company needed a visual identity that would make it stand out in the industry. Mike abandoned the idea of hiring the services of traditional providers. Although they considered it, it lacked the creative input they were looking for and many of the contracts limited them to only three to four designs based on their brief, with two to three revisions. “This didn’t suit us one little bit, seeing as we both consider our brand and image incredibly important. We wanted more options than this.”

And options they had—a full 213 of them—on Freelancer.com, the world’s most preferred outsourcing marketplace. Instead of doing a project posting, he staged a design contest. “We thought a contest would provide more valuable results for us than a simple job listing,” he says.  “The challenge was that, on the one hand, we have to attract students and graduates—people who aren’t in aviation, but want to be—so we have to be approachable, personable, and to remove ourselves from the corporate nature of the majority of the business,” he explains. “Conversely, we also have to deal directly with large corporations and looking too casual or comical hurts our ability to be taken seriously in a very old fashioned industry. It’s a difficult line to tread.”

In the end, Satgraphic came up with the winning bird-and-airplane logo. “They came up with a concept that we were a personality-driven startup—which is exactly right—and then worked on extrapolating what our two personalities would look like in a graphical context.” He further adds that they liked the dynamism the design offers—the base design can be applied in various ways. “There was also this implied progression, which aviation goes through at some stage, from watching birds fly to being involved in large commercial jets. The levels on which this identity felt right are limitless—and we grow fonder of it every day.”

Going into this contest, Mike adhered to only two rules: every design gets feedback and feedback should be critical but supportive.  When he first discovered the contest feature on Freelancer.com, he reviewed a fair number of the other contests to see if the quality of work was up to scratch. “I was amazed by the quality of work on display and realized very early in this process that we could really get what we wanted in this format, and the best way to ensure that was to be very involved from the outset,” he advises.

“Freelancer.com provided us with fantastic value for money and an excellent platform for our design contest. It is easy, exciting, and fruitful,” he concludes. “Without Freelancer.com, we almost certainly wouldn’t have the identity we now have, and we’d have paid a lot more for the privilege. I recommend the site to my peers who are looking for development or design work.”

Camille Reed, an employee turned entrepreneur, hired a freelancer to build her a website and hopefully bring her business to the MVP level.

Blogs provide an amazing opportunity to start a side-business. Learn the basics before heading out on a new adventure